Michael O’Keefe (www.michaelokeefestudio.com) is an artist living and working in Dallas, Texas.  He is the founder of the O’Keefe Studio, “an independent teaching space dedicated to arts education” (theokeefestudio.com), located in Richardson, TX.  I had the pleasure of encountering Michael’s art in my first year as an undergraduate student at SMU in Dallas.  He had completed his MFA and donated a sculptural work, The Gaits, a 12-foot wide colored plaster relief, to Meadows School of the Arts.  It met me on the way to class every morning; the work and I developed a temporal relationship.

Within, bisected profiles of Giacometti-like shadows walk, pace, idol, and are contained behind a rope tether. A cubistic shattered perspective drives your eyes into a shallow world like a skipping stone meets the rhythmic rejecting tension of a still pond’s surface.  The forms merge with the rough texture of the plaster, modeled like a rocky, natural cave wall.  They are carved (I want to believe but know I can’t) not by a man’s intent but by deep time.  The shadows, with hunched shoulders and tense, sad postures, are the ghosts of man’s waking mind.  They are the poor in the street, the hurried in a bustling city, and a thousand other audible reflections.

Michael’s work is minimal, elegant, raucous, soft.  He skims and recombines a wide, multi-cultural history with influences emerging from Cambodian sculpture to El Greco altarpieces.  What follows is an e-mail conversation about the nature of the artist’s work and thought…

QAR: You describe your completed works as a.) evidence of a decisive process b.) character or fantasy.  It seems to me that there is a narrative to your art that is separate from process-am I fully off-base?  If I am not, tell me some of the stories your works tell.

MO: I see my work as having two distinct, but not always separate narratives, that of the making process and that of the image depicted.  The image depicted is always born out of the making process, and it is my desire that, within the image, there always remain unveiled evidence of the making process.  The characters that exist in my work are narrative in nature, however the narrative or any of the specifics of these figures are never predetermined.  The material process, as has to be the case, is always loosely predetermined, but allows for shifts and unusual deviations.  So, in the end, the figures and the narrative context of those figures are discovered or uncovered through the process of pushing around and sorting through formal relationships.  There are themes in my work that I recognize time and time again.  So, naturally, the themes that animate my conscious mind find a way to assert themselves in the work without me ever having to embark on the suffocating experience of setting out to illustrate a theme.

QAR:  There is an age-old beef between drawing and sculpting. Which encapsulates more complexity? Which is the higher form?  Are these modes of creation different sides of the same coin for you?  Can one form express what the other can’t?  Which medium makes your heart sing the loudest?

MO:  Both drawing and sculpture, when good, make my heart sing.  I see them as two distinct forms with a lot of crossover.  I engage with both drawing and sculpture equally, and I am constantly looking for opportunities to allow the one form to lead the other into uncharted (for me) territory.  I often wonder how I can approach a certain drawing realization in sculptural terms or vice versa.  One can read some about this debate over which form is more complex or “higher”, or the similar debate regarding painting and sculpture, but mostly this is the sort of thing one hears at the bar when in grad school; I have always found this sort of conversation to be a distraction from more meaningful things, like time spent working in the studio.  All art forms have their limitations, and in order to make hearts sing any art form needs to be pursued to the highest point possible.  How high a form reaches has to do with the depth of the artist more than any inherent qualities of the form.

QAR: How (or did) a formal education in the arts expand your process?  What kind of work did you make before your schooling and does it resonate in the work you make now?

MO: Since I can remember, making drawings, paintings or sculptures has always been the same for me, felt the same in terms of motivation, impulse, desire, playfulness and discovery.  The institutions I have attended have cemented my idea that institutions are not necessary for an artist to make mature and sophisticated work. Formal educations are more about social networking and affirmation than anything else.  Yet, today, one has such great access to other artists, dead and alive, that the institution is less necessary even in terms of the networking and affirmation.  Having said that, I needed to learn to draw and mix plaster somewhere, so I am grateful to the teachers that taught me these things.  But, for me, the real education has always been found in the independent acts of time spent working, time spent looking and time spent reflecting.

QAR: What is the place of the material artist in the digital/industrialized age?  How can artists concerned with formalism and craft contextualize their mode of working in the age of the capitalist studio system (Koons, Murakami, Hurst, Ozeri, Wiley, on and on)?

MO: I would first point out that the “capitalist studio system” has existed for thousands of years. I will address the rest of the question with a story:  Soon after 9/11, when I was living in NYC, I took a drive with Christopher Cairns, an older artist I was working with at the time, out to the Johnson Atelier in Mercerville, NJ to see the work of an artist who I will leave unnamed.  Given the recent events and my age (23) I was rather emotional.  The work we saw that day made me angry as I wondered why such superficial and gimmicky crap (as I might have called it at the time) was celebrated.  As we drove back together I expressed to Chris my feelings about the work.  As I recall, Chris said something along the lines of, “Look, you best realize right now that there are many different types out there and that the term artist is attributed to all sorts of people, many of which have nothing to do with what you are interested in.  You need to recognize the type of artist that you are and forget about the rest, forget about what is celebrated, collected, reviewed, and the rest.  The artist whose work we just saw is no more akin to you then a used car salesman.  You don’t get upset when a loser used car salesman makes money off of sleazy deals so don’t get upset about this.  Just do your work and think of him as a used car salesman if you need to.”

MO: My favorite living artist is myself.  I think at a certain point this has to be the case for an artist.  My favorite dead artists are far too many to count, but if I were to begin to make the list, at the top would be the cave painters from Lascaux and Chauvet, and not because they are at the beginning of the history of art, but because of the nature of the works.

QAR: If you could take anyone dead or alive to dinner, who would it be?  Why?

MO: I have never liked this question.  However, after having particularly interesting dreams last night,  it occurred to me that it would be interesting to visit with Carl Jung and talk to him about the correlation between my vivid dream life and my need/desire to, in my waking hours, create images and objects.  But then again, these days, this might be a better conversation to have with a Neuroscientist…maybe I would go to dinner with Jung and some art loving Neuroscientist like V.S. Ramachandran. 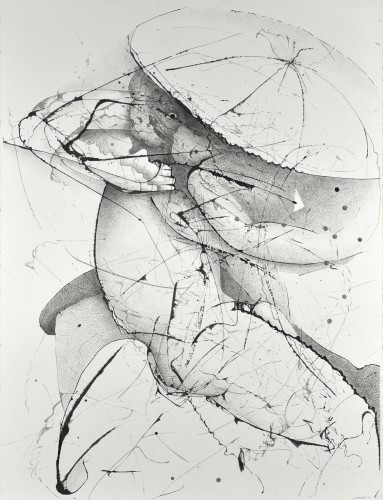 QAR: I feel a lot of influence of the modernists in your work (Picasso, Matisse, Brancusi), I also feel deep Greek classicism.  Talk to me about how these worlds collide in the art you make.

MO: These influences are present in my work and they are the influences that are most often perceived in my work.  These influences are not so much intended as they are accepted and embraced.   Although I would like to point out that, for me, there are other very important influences such as Medieval Sculpture, Cambodian sculpture or painters such as El Greco and Rembrandt.  In one sense the Classicism/Modernism evidence is simply a reflection of my love for these two moments in the history of art.  In another sense it is indicative of one of the themes in my work, that is, the struggles of a 21st century artist (myself) of European ancestry living in America who has invested a lot of time and energy in communing with work from the past as a means to become a relevant contemporary artist.  And part of this theme is my rejection of the fact that many would say to be a relevant contemporary artist of European decent living in America in the 21st century one has to go out their way to divorce themselves form any history that precedes their 13th birthday.

QAR: What is your opus to date, use words to give a physical description of it.

MO: It will most likely always be the case that I will see my most important artistic accomplishment to be the entire body of work to date at any given moment.   There are a few works that stand out as better than the rest, but in the end even those works are launching pads for the next work.  At the moment a work comes into its completed state, I am already shoving off in search of the next work.