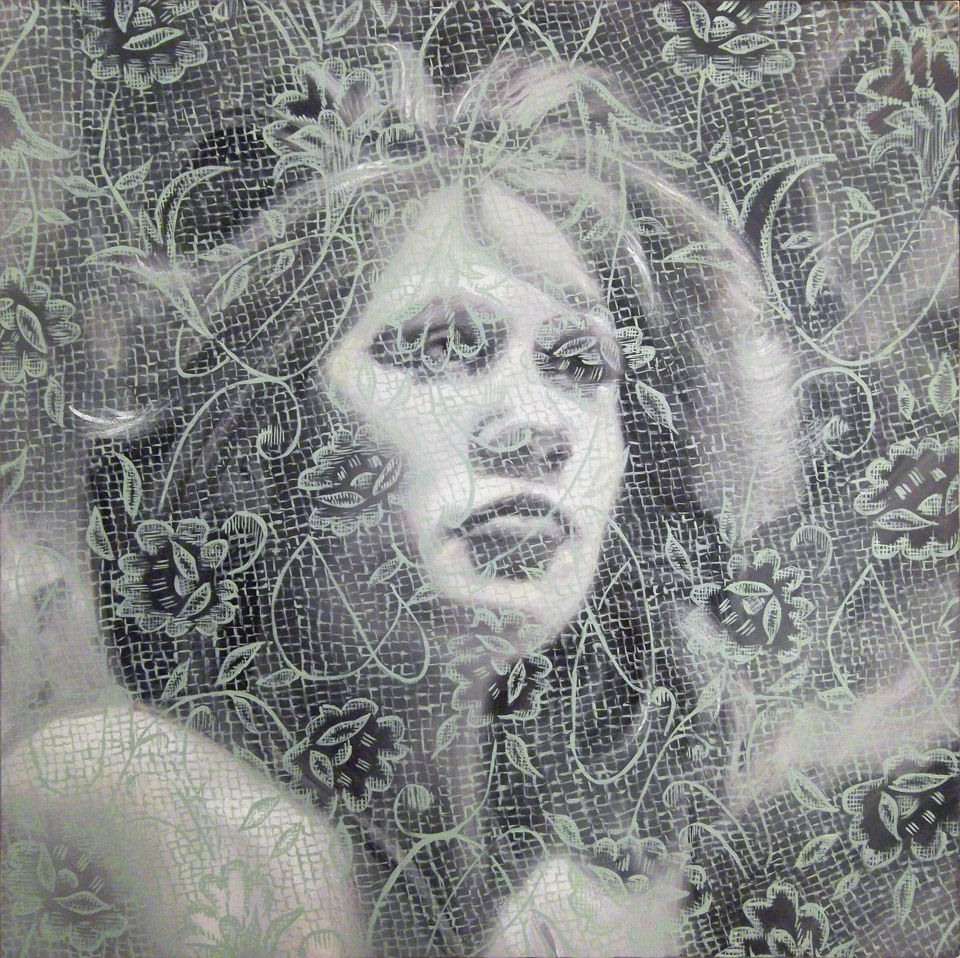 Holly Ann Scoggins is a figurative painter and professor at Polk State College in Florida. The viewer’s of her art peer through lattices of patterned textiles on the picture plane’s surface (like vines and underbrush in a dense forest) that tangle, reveal or obfuscate female portraiture and rural narratives set in the American South.  Scoggins was raised in North Carolina, whose culture plays a continuous and significant role in her painting.  The sense of location, I think, is so defined in the narrative works that imagined humidity might raise beads of sweat on the forehead of the audience. Her work is executed quickly, but with a sophisticated emotional and formal precision.  I was lucky to talk with the artist about her paintings; our discussion follows.

JH: You grew up in the deep south, to me your paintings are effuse with the weight of that cultural history.  Speak a little about how your origins feed your art.

HAS: Old Graveyards, magnolia trees, abandoned homes, lace curtains, stoic women, trailer parks, dirt roads, fake flowers, church pews… these are the images that have stuck with me throughout my southern upbringing. I guess you could call me a Dark Romantic in a sense. Like many southerners, you are unknowingly haunted by your own landscape. I was raised in Church and taught by example about southern “femininity.’ This concept is unveiled on Easter when you show up in your pretty church dress…..you know that your true femininity (identity) lies somewhere in-between working yourself to death, respecting those around you, and submitting to God.

Graveyards have always been a source of ambivalence for me- loving the aesthetics but disliking the morbidity, knowing this world is temporal yet trying to make it beautiful. I am convinced there is an unsafe romance with death for some southerners; at least this is my experience. My artwork is unabashedly inspired by the spiritual and visual components of my southern history, as well as the power of the female form.

HAS: Hands down Vuillard, I call him the pixilated prince of painting. It’s as if you squinted and the world flashed before you and you capture the emotion of that moment. A sudden silhouetted experience of figures in light, shadow, and muted color. The economy of his brushstrokes leaves me in lust for the rest of the story. There is a beautiful mystery to his work that I will never quite understand, but always respect and wish to emulate. I am particularly interested in his work because his female figures are often entangled in patterns of the time.

A contemporary artist I currently admire is not a painter, but a sculptor Petah Coyne. She sculpts the way I wish to paint. The simplicity of imagery and sublime mood captivate me and break my heart at the same time. I wish to build a room of her work and live in it.

JH: Your subjects are generally females shrouded in a layer of textile intricacies that form a sort of metaphysical veil.  These intricacies both hold your figures together and allow them to dissolve. Expand on this metaphor-it feels like the state of being female, human, saddened, fragmented-am I on the right track?

HAS: Intricate textiles symbolize many opposing concepts. The act of making these items can be laborious and tedious work yet it represents beauty and idealized femininity. Lace as a tangible item ties the greatest female monarch to a prostitute. Lace and pattern florals wrapping over female skin become the unifier visually and metaphorically. My figures often have eyes closed and are internally reflective. I want them intriguing, fragmented, distant, protected, shrouded, pensive, silently implied.  My figures present an “ In the world but not of the world” idea. The visual concept of dissolving, veiling, and layering speaks about simultaneous struggle and assurance that there is something greater to hold onto no matter what the circumstance.

JH: As a professor of art, how does teaching inform your practice?

HAS: Teaching is a constant renewal of the foundations of art, and it often purifies my motives for making art. My students teach me how to simplify in so many ways.

What is a rectangle but a white space for an illusion to be created? The fundamentals of design are invaluable. Everyday I teach design students shapes, lines, colors, patterns, textures, and everyday it re-informs me of the simple things you can do with format and white space.

Every image within that rectangle stems from personal background and experience. But, as complex as the human existence is, the artist chooses what portions of their lives to expose, selectively choosing what subjects to place inside. A trail of paintings is a secondary road in an artist’s life that (in my case) makes you observe, memorialize, and ponder your own mortality.

JH: Do you think a formal education in the arts is expansive or subtractive to the experience of making?

HAS: Formal education in the arts has been expansive for me personally. As a first generation graduate, my education has been invaluable and I would not mind being a professional student for the remainder of my life. However, there comes a point for each art student where they can fall into the pit of consuming themselves with other artist’s/philosopher’s theories and concerns rather than their own. If an artist gets so far as to forget why they initially picked up a paintbrush, they have missed the mark.  I think of what CS Lewis wrote in the Pilgrims Regress about the Landlord. “We have it right in front of us the whole time, we just don’t know what to do with it and who to believe!”

So often contemporary art becomes detached and dry; no human touch or influence is evident. This is when it becomes subtractive. The big picture is that we are human beings creating objects and items with no inherent value but with immense cultural importance. Authenticity is priceless!

JH: In a very poignant series, you painted textile veils over the portraits of murdered women, some famous, some anonymous, and I know the process was research-intensive.  Did you feel bonded to these women? Do you re-victimize them through your work?

HAS: These paintings are a memorialization rather than a victimization. I work out my own fears and questions through the act of painting while drawing attention to their stories. The series “ When a rose speaks to the grave” consists of a series of portraits of women that are as equally individual as they are self-portraits. I feel bonded to their story. In these artworks, I separate the viewer from the viewed and the subject is no longer vulnerable.

The writer Julia Kristeva states “the transcendence of death through art leads to a rebirth, in returning, through the event of death, towards that which produces its break; in exporting semiotic mobility across the border on which the symbolic is established, the artist sketches out a kind of second birth.”

Lace is a fabric that has symbolically stood at a gap. In one regard lace is fragile. It is delicate and used for mourning. On the other hand it is sexual and commercial.  In contemporary culture, a veil or “ Burka” is seen as an object of female repression. The lace works as a shroud in my paintings protecting and covering the woman’s face. But why the spaces between the threads if the fabric is meant to cover?  The viewer is still able to see her gaze through the veil. In the book “Over Her Dead Body,” Elizabeth Bronfen wrote that depicting a deceased woman in an artwork is a “displaced representation of the viewer’s own mortality….the knowledge that the image is inanimate and a belief that a gaze can animate the portrait and resurrect her absent body, but above all the possible substitutions of the dead woman’s image for your own”

JH: Who are some of your inspirations?

HAS: My recent paintings are partially inspired by Charlotte Perkins Gillman- the short story The Yellow Wallpaper. It’s a Gothic horror tale, character study, and exquisite commentary on women’s rights.

Each painting is a painting of a young woman wrapped in floral pattern-work.  They show a constant flux between light and shadow shapes. I am using light as a metaphor to depict an internal spiritual dissonance. Informed some by the work of Francesca Woodward, patterns run across the camouflaged flesh blending in and out of the mimicked backdrop I have created. In contrast to the murder series, I am now painting the young women in my life, getting to better know them in the process and applying a pattern as I formally see fit. The patterns begin infiltrating the skin, blurring the lines between the viewer and the subject.