Jane LaFarge Hamill and I met when I invited her to participate in a curation project at the now liquidated Lounge Underground Artist Collective.  I distinctly remember unwrapping the first of two small paintings she delivered to the space; I was taken back in the revelation of the image.  A delicately realized portrait (possibly referencing 19th century French Academic practice) sat submerged in an asphalt darkness.  The visage was punctuated, vibrated, violated by a registry of palatially desicive palate knife gestures- a violence constructed of deeply saturate hue.  The aura of this thing hit me, like I was holding something living.  I realized what I was holding was consequential, maybe very important, and I held it much more carefully.  I later realized what I experienced was the aura I seek in all art, that all true art must contain and share this- that presence that can only be felt before the object itself and not through photography or any sort of reproduction.

What follows is a discussion with Jane about her work, which is continually growing stronger.  I say with no lack of consideration that Jane is an immense and gifted artist, and I’m honored to watch her progression. 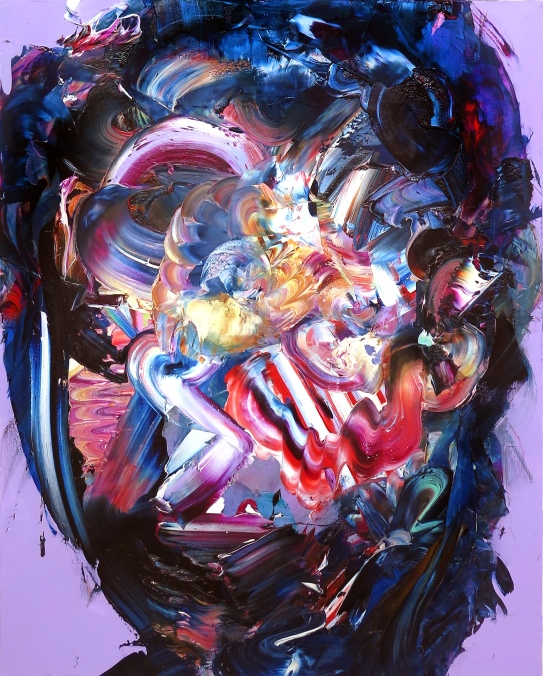 Jacob Hicks: What does a face mean and what does the absence of a face mean?

Jane Lafarge Hamill: There’s no way to tell a person’s character by looking at their face. But of course we all look for clues of it in expression, for physicality that communicates more truthfully than what we say- and that’s part of what I’m interested in representing. It’s about what clues to keep in, and what to leave absent.

I prefer to think of what I’m painting as a head, not the face. It’s important for me to try to bring out what’s behind the face- to break down and pull apart the facade just enough that the interior bits- the rich parts, can come out. I’ll borrow Nicola Tyson’s term ‘psycho-figuration’ for the kind of painting that I’m making. 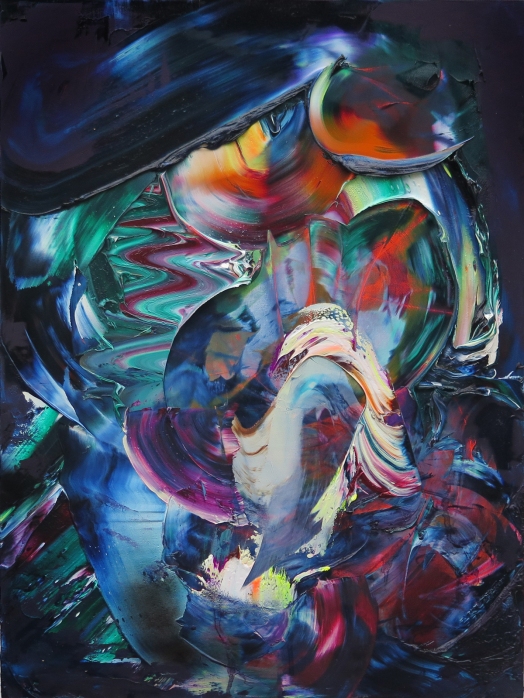 JH: Your paintings ebb between so many dualities- continuity and dissolution, presence and absence, matter and space, anger and passivity, ghost and flesh, death and vitality, abstraction and true form, the ancient and the modern. Why is it important to express these borderlines, how do you do it? Tell me about your process of making…

JLH: The borderlines are important because that’s where you’re pushing and pulling between states of static. Static is quite a boring and debilitating space; it’s where we get comfortable and stop growing. It’s on the edges between the dualities you mention- where the discussions are.

And the process…. well, it changes, because I want to do something new every time.  Which I guess is pretty weird for me to say, because I’ve been painting the same subject on the same scale for 2 years now! But the improvisation in brushwork, and changes in what the subject is saying, move each painting beyond the previous. 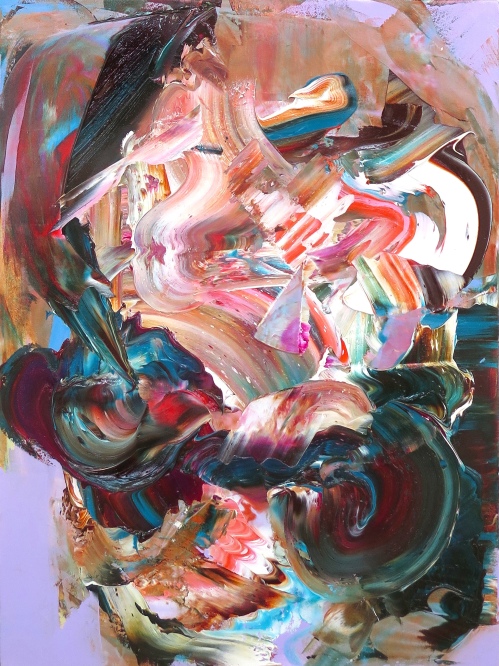 JH: To me your paintings are expressions of fragmentations of selfhood visiting/haunting you.  Do you find the same expressions manifesting over and over-are their personas or states that are repeated in the history of your works?

JLH: It would take me some serious time with a psychologist to figure out what fragments of selfhood keep haunting my work! As much as we have to be accountable for our work as artists, much of the time you can’t make good work while being completely aware of it’s meaning. That comes later. We explain ourselves to ourselves. But I’m way too close to the paintings to be able to step back right now farther than a few feet- it may ruin the whole progression. Not to say I don’t walk up to my studio looking at the gravel thinking: so what the hell am I painting about today? Which I do, every time. 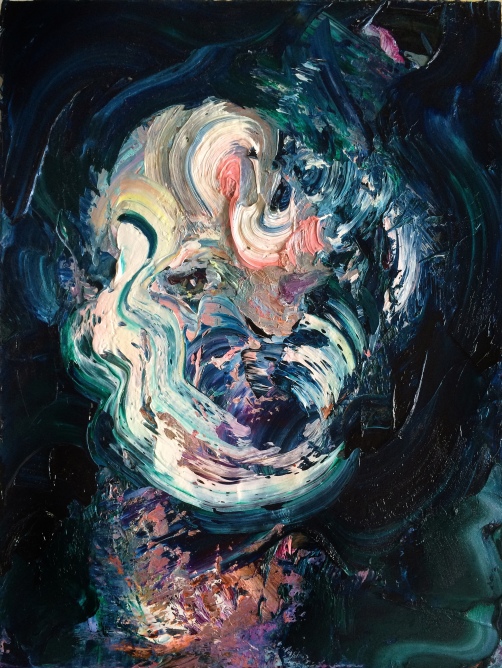 JH: Who is your favorite dead and gone painter, who is a contemporary painter whose work is interesting? Favorite movie? Director? Musician? Time period? Artist?

JLH: This question reminds me of those articles in women’s magazines that asks someone what’s in her purse….

So- dead (but not gone) painter is my absolute favorite painter- Euan Uglow. I was introduced to his work while studying at the Slade in 2001 just after he died. He’s why I became a painter. Seeing his work is a bit like going to church. It’s a touchstone.

My favorite contemporary painter for the last 3 years, has been Peter Krauskompf. Please check him out if you don’t already know his work.

For a favorite time period, I’ll define favorite by most interest in? 1919-1933 Weimar Germany. I’ve always been interested in what happened during this short, unstable, chaotic, but politically, intellectually, and artistically creative time between wars. Wild times. I would have liked a few nights out on the town in 1920s Berlin, taken in a Paul Klee lecture at the Bauhaus, talk to Adorno, you know… 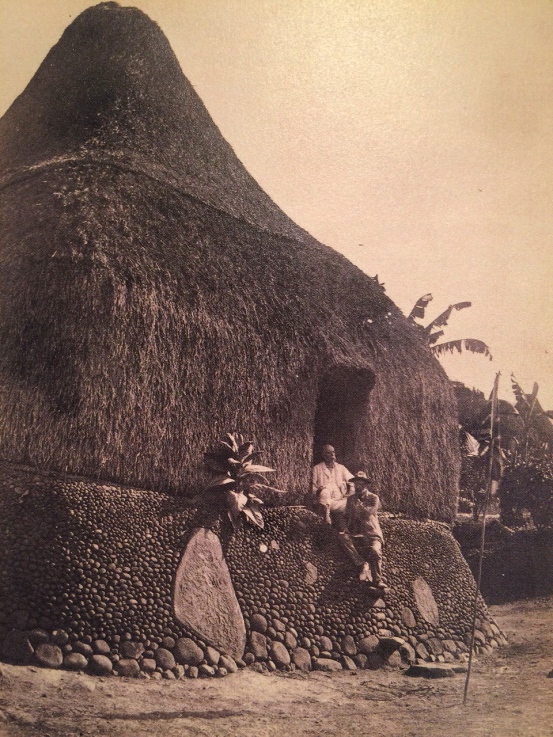 JH: What is the influence of the artist John Lafarge-your great great grandfather-on your art?

JLH: I think the influence of my great great grandfather’s art was actually mostly important as an influence on my becoming an artist.

Seeing his work hung on the MET walls as a kid, made it seem normal that people you might even be personally connected to could have their work in museums. The human quality in that- understanding at a young age that all those pieces of great art were made by actual, real, normal people, was a lesson.

Yes, John LaFarge was best known for his stained glass work, but he was a remarkably versatile artist, and it was during a show of his paintings at Yale a few years ago that I felt a deeper connection to his work; on top of my familial pride to him as a man. The Yale show concentrated on his travels throughout the South Pacific begun in 1890. (He was painting in Tahiti before Gauguin, and their versions of the same places are complete contrasts.) There are 12 surviving sketch books from those South Seas travels that contain landscape and figurative drawings, but also copious notes on culture and language… in very tiny lettering. The photo I’m including is of John LaFarge (right) and his travel companion Henry Adams (left) in Fiji. Hard to see, but I inherited his nose.

It’s a practice that seems to be following in the family- my husband Jason Bereswill is also a travel painter, documenting time and place with sketches wherever we go. He does the same as LaFarge, coming back to the studio to flesh field work into larger paintings. Although the two differ in that Jason paints a bit of human folly/clumsiness within the majestic natural landscape, and LaFarge was more romantic with his graceful figures working with nature. 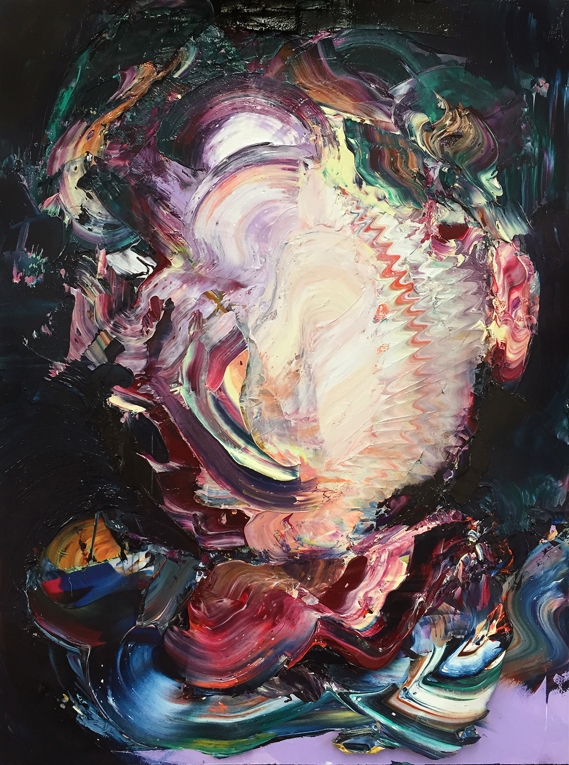 JLH: As I’m writing this I just had a show come down. And now I’m thankfully working quietly on a new series in my studio. My new studio just got built on our farm, so I’m breaking it in and getting used to the space. It’s amazing how important all of the little tweaks are- like the warmth of the lighting for painting at night. Coming up this Spring, I’ll be in LA on an artist residency I was awarded at the 18th Street Arts Center in Santa Monica. Road trip!