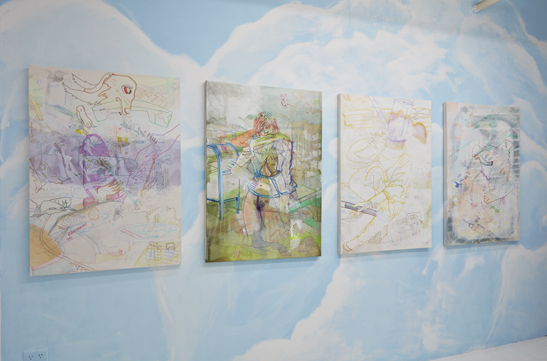 Within the new Tribeca gallery Lubov, upstairs and unassuming, I found the paintings of Katrina Fimmel. A grouping of large, oddly beautiful and reverie-laden mixed-media transparencies are hung on walls painted like midday clouds. I must admit, at first I felt rebuked and removed from the art. I searched for an entry point, but I think the lack of focal consequence ends up being the point, a kind of confrontation with a void made visible. In contemporary life, where we swim through visual information inconsequentially, almost all of which has a hidden capitalistic agenda, to look through becomes an act of seeing.

How is one allowed inside an image when every inch is transparent?  The Francis Picabia retrospective at MoMA is a good historical relative to this work. He too has a series of transparent paintings where, like Fimmel, lines and form confuse layer and focus.  Both artists expose a disturbing cynicism toward modern (in Picabia’s case) and post-modern/late-capitalism (for Fimmel’s) daily life. Value can be found in not trusting an image, in using our imagination to swim past a visual surface.

Dadaism, Picabia’s heart, exposes absurdity through the expression of it. In times of political and social turmoil, when the corrupt disposes us of what we know as truth, a heartfelt expression of nonsense we are expected to accept thrown back at society seems just.

When pieced back together the broken images of Fimmel are strong longings for childhood. They speak of injury, fleeting time, adolescence, Saturday morning cartoons. They are genuine and cynical simultaneously, innocent and suspicious. I would recommend keeping an eye out for more of her work, it is strong, and dare I say, layered.