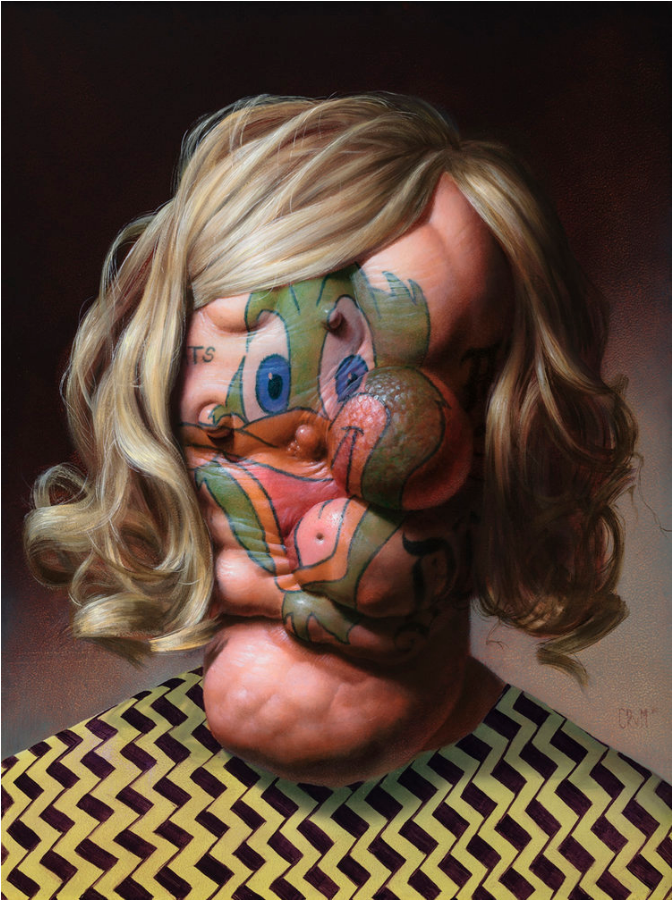 I fell in sort of angry love with the paintings of Christian Rex van Minnen (what a name: a religious predatory dinosaur Dutch Master). This is true art floating through the thick fog of contentless, deskilled, rapidly produced art world uneducated wealthy person chicken feed that saturates and obstructs true voices.  He lobs technical precision into the birthing of sugary monstrosities, articulated insanities, perfectly formed pustule mirrors reflecting rupturing cultural delusions and illnesses no one dares look at but everyone proliferates.

Your paintings are the equivalent of quality production blockbuster movies: technical precisionism rooted in old master practice, totally compelling illusionism; all of this adds up to an uncanny, stomach-turning, semi-computer generated (but with a quattrocento instagram filter) horror that is very time/generation specific. You are Cronenberg without a budget cap and tempted by cgi. How do you relate to cinema and what is your specific kind of grotesque’s aimed societal comment?

I do like movies. Cronenberg, Werner Herzog and David Lynch are my favorite directors. I knew movies way before I knew art so they have naturally had a strong influence on my work. I’ve always loved directors who intentionally aim to destabilize the viewer in a benevolent sort of way. Disturbance is ok, but if it isn’t followed with some heart and good intentions you’re just an asshole.

You know that feeling as a child on Halloween had from consuming too much candy? All of the excitement before in the amassing, the lack of restriction during consumption, the little pings of oncoming sickness, finally the inevitable ache. I feel in your work a deep celebration of that gut sickness and the wildness that leads there. All sorts of floating, metaphysical crystalline sugar confections bloom within your picture planes. What is your relationship to sweets, these mass produced and beautiful little poison pellets we are trained to revere, though they sicken us?

I can identify with that in so far as what you are describing is a commingling of contrasting emotions and feelings. To be completely honest I didn’t realize that they would be almost universally interpreted as candy. That wasn’t my intention, as naive as that may sound. I was mining for a new range of imagery and a technical approach that could increase contrast, both technically and conceptually. These bright, ultra-luminous, transparent, often weightless whimsical objects were the solution.

What is it about the ugly sensation, cankers, cancers, horrors, that so provokes you to your result, and why so much precisionism in its depiction?

I don’t really know. I think that those forms come from noodling the paint. Just making things up as I go, things look distorted, cancerous, bulbous. I drag those images through a division of labor that makes them believable. I like the result! It has certainly led to a lot of interesting imagery and post-rationalizing of concept. But, in the end, it’s fundamental surreal, automatic drawing/painting. I aim for believability rather than representation.

Tell me about your relationship to the Dutch still-life. That golden age was one of excess wealth and so for the first time a wide array of non-religious art appeared. Yours is that but in a cult of death sort of way, an exuberance for rotting fills the religious void.

That too is a result of a confluence of interests. First and foremost, that era produced paintings that I am most visually attracted to. It’s oil painting at it’s zenith. So much of it was about technique and that had a lot to do with the market being detached from the church. Then there’s the issue of legacy. My father is from South Africa, and many generations before that, Flanders. There is some dark history there in the middle. I was raised to think a lot about legacy and atonement and how to right the wrongs of the past. Consequently, I have thought a lot about my connection to Europe and what it means to be an American of European heritage.

Who are your major influences, painting, music, literature, etc…?

How political is your work–what do artists do during our current climate of American unraveling?

I don’t know. People say that it’s all political right? Let’s go with that. I was in the studio watching it all happen, the election, and it was like that scene in Alien. Seemed like it was going ok then the convulsions and the chest bursting and this fucking shit. I felt both bewildered but also emboldened. This is my work, I’ve been training for this. This is a spiritual war. How did you start exhibiting with Poulsen? Give me a little of your working/personal history/trajectory that got you from point A to B.

I met Morten the first year I moved to NYC. A couple of the artists there, also friends of mine, told him about my work. He came over to my studio, basically a closet in my apartment, and liked what he saw and then things just took off. He is a force, that Morten Poulsen. Not to be underestimated. I’m very grateful for what he’s done for me and my family.

I am making a new body of work for a 4 person show at Postmasters Gallery here in New York in March that I’m really, really excited about. Then preparing for my first solo show with Richard Heller Gallery out in LA late fall. It’s a big year and I’m just excited that I can go into that studio everyday and make work that people are into right now. Very grateful.